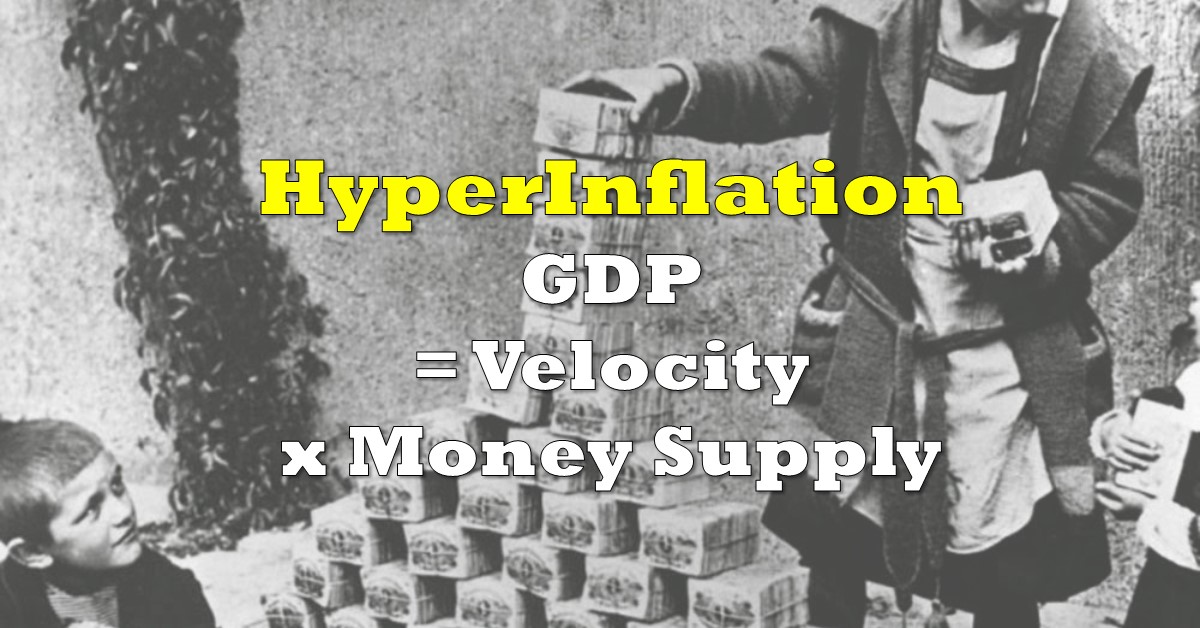 When trying to understand economics, I like to simplify the basics down to the smallest detail. A formula that has always resonated with me is GDP = velocity x money supply.

This basic principle is at the heart of Modern monetary theory. The concept is simple. The measuring stick is full employment; balance between job seekers and job creators. From the governments perspective, if the economy is too hot (beyond full employment), you reduce the money supply by raising taxes or selling treasury bills. Conversely, if the economy is too cold (below full employment), then do the opposite, increase the money supply by lowering taxes and buying securities.

The main difference between what we have today and MMT is the wall between central banks and fiscal policymakers. With the measures recently announced, we are starting to see these walls come down.

Where are we now?

Things are bad. Catastrophic. We have never seen unemployment insurance claims or reduced productivity like this. Over the course of 3 weeks, we have seen a drop in the level of depression for almost all areas of the economy absent from basic foodstuffs and essential services. Buckle up, the world revolves around change. Politicians no longer ask us to shut down the economy; they force us to.

We’ve seen 10 million Americans file for unemployment in the past two weeks, Italy’s service sector shut down, AirBnB listings flooded the rental market, oil fell nearly 70% and global stock markets lost $12 trillion in grease. Many politicians are now admitting it could last until August. In other words, we’re just getting started.

Last night Bernie Sanders said in real time with Bill Maher that a “Great Depression” type scenario is possible. And this morning I woke up to a text from my friend Muddy that said, ‘Depression is guaranteed.’ All of this would have been crazy talk just a month ago. Now it’s starting to sink in.

We have to watch the Coronapocalypse in three buckets. The virus, economy and finance.

First there is the virus. In order to stop the virus, we basically have to stop living our normal lives. This means we need to shut down the economy and focus on sustaining it until we restart. The set of tools to do this will involve a combination of monitoring data, adding liquidity through central banks, and spending taxpayers’ money on government programs.

When you stop economy, you really stop velocity. This is where the economy gets interesting. A recent study by MNP showed that nearly half of Canadians thought they were insolvent even before the crisis began. So if their income is cut for more than a month, they cannot pay their bills. From an economic point of view, the money will not change hands and the velocity is burned out. GDP would likely see an annualized decline of more than 50% in the quarter.

So what should a government do? Remember, GDP = velocity x money supply.

Our great leaders will turn on the printing presses and start distributing money to everyone. They will offer loans to their 24 primary traders, buy treasury bills and agency debt, and offer credit facilities for just about everything. And that’s just the central bank!

In an article I wrote last weekend, I explained how the loan facilities will work. It does not matter if the money comes from the fiscal end or from the monetary end, the taxpayer is responsible.

And fiscally, the US government has already launched a two trillion dollar program called the CARES Act:

So overall, the Fed and the Treasury are looking to do somewhere in the ballpark of $6 trillion between them; with more mumbles in the works. This will increase the money supply and compensate for the reduction in velocity.

And what are the side effects?

Eventually the economy will pick up and the speed will pick up. Suppose the money supply is now more than 2 times what it was before the start of the pandemic. If we go to the same level of productivity as the pre-corona level, then expect twice the GDP. So, in theory, we could have double the GDP than before with no change in pre-corona productivity. What’s the difference you ask? Inflation.

The variable that we cannot take into account in economics is human behavior. History has taught us that when prices begin to rise to hyperinflationary levels, people want to get rid of their money as fast as they receive it, accelerating the velocity even further, known as galloping inflation.

What is the probability of hyperinflation?

The longer the economy remains shut down, the more money we will print; increasing the risk of this outcome. We believe we are beginning to build our portfolio around precious metals to help hedge this risk. We think the peg of the US dollar to gold is a relatively high potential outcome. Except this time, gold will be pegged at a much higher value than today’s prices.

In the end, no one really knows how it will turn out. The United States is seeing the effects of a $22 trillion economic shutdown for what could last anywhere from 3 to 18 months. The actions taken by leaders create a real-time experience that magnifies tail risk with each passing day. You’re damned if you do, you’re damned if you don’t. In the aftermath, watching governments attempt to unwind such significant measures in real time will be a focus for economists around the world.

Information for this briefing was found via the links provided. The author has no security or affiliation related to this organization. Not a buy or sell recommendation. Always do additional research and consult a professional before purchasing a title. The author holds no license.

SmallCapSteve started blogging in the winter of 2009. During that time, he was able to spot many takeover candidates and select a variety of stocks that yielded returns over 200%. Today, he consults with microcap companies helping them develop capital markets strategy and focuses on sectors such as cannabis, technology and junior mining.